Why I'll be keeping my Apple Watch 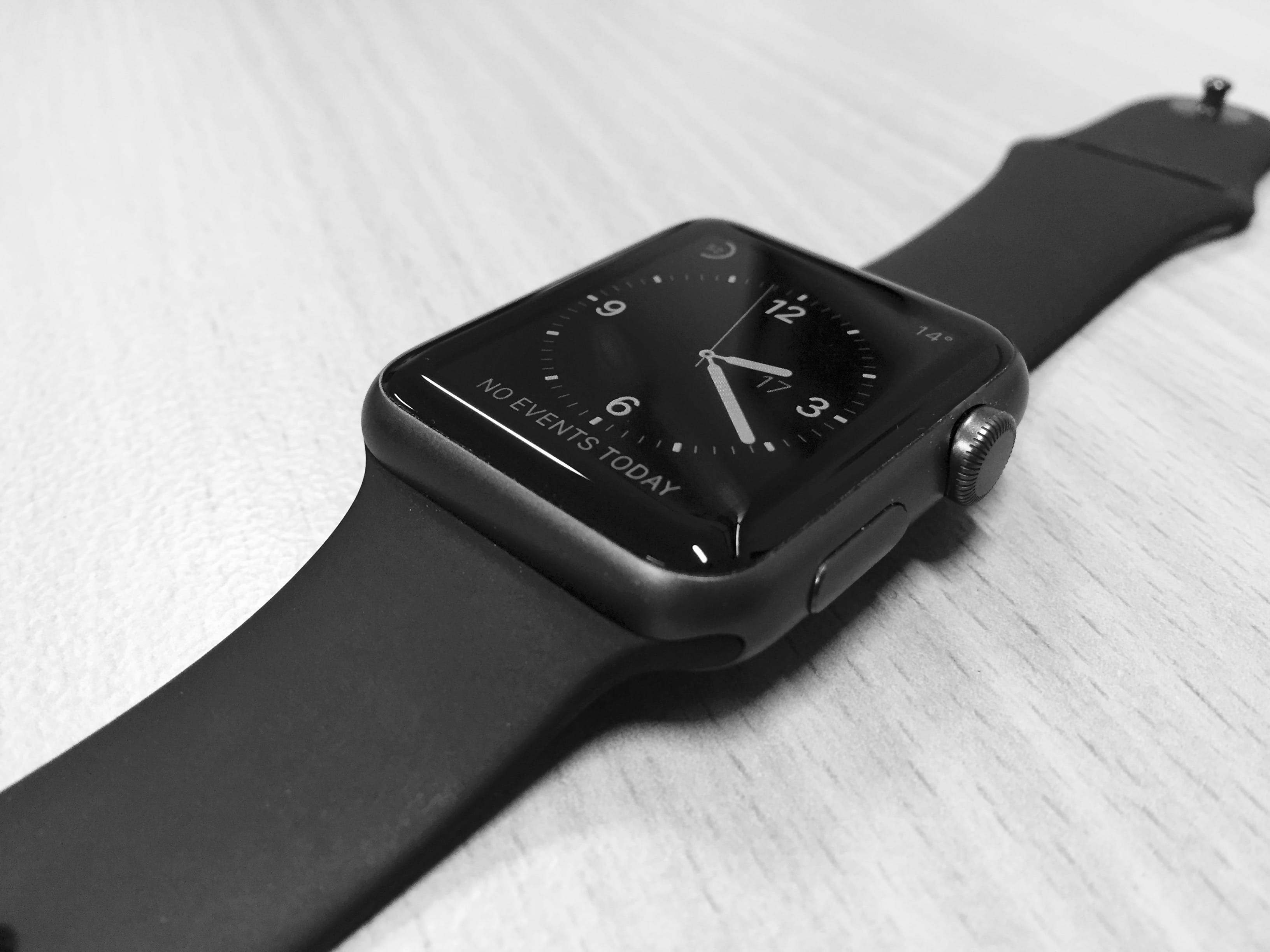 Update: I changed the post title from Why I won’t be keeping my Apple Watch to the current one. Let me explain why.

My biggest gripe with the watch was the in my opinion abysmal battery performance of my iPhone when connected to the watch. I’m not entirely sure what changed, but I believe the watch is actually affecting how I use my phone during the day. Specifically how often I do so. I’m currently ending ~16 hour days with around 70% of a charge left in the watch and my iPhone somewhere around 50%. That’s actually better than what I’m used to without the watch!

Let me somewhat reiterate on the other cons listed below as well:

The low usability is still something I struggle with. Although it’s gotten better. The only apps really not playing all too nice with the watch are those that send notifications, but don’t tell you what they’re about. In my case those would be Threema and Signal. The problem is that this is actually somewhat the point of these apps, so I guess I’ll just have to live with that 😉 The social stigma is also still there. Using the watch daily you just get better at not pissing other people off when looking at it discreetly. Or you do it so much that others just don’t care anymore. And for Siri… Well, I’ve just gotten used to activating Siri by pressing the digital crown. Voice activation still seems to hate me.

So much for the update. Read below for the original post written a few days after I originally got the watch.

This post is basically one big personal opinion. Some things I’ve noticed about the Apple Watch while using it for a short time. Maybe others will see them the same way and maybe these points don’t apply to you at all, that’s ok, I’m not trying to make any definitive statement. This is just what I’ve observed.

Let’s make this one big pro/contra list and start it out with the positive points. The stuff the Apple Watch gets right.

This is hands-down the best Watch feature. The way the Watch notifies you about pretty much anything is something I fell in love with right away. It’s extremely subtle yet still impossible to miss. We’re all used to having our phones vibrate in our pockets to tell us stuff is going on. And even though this works, it’s tedious pulling your phone out of your pocket only to see you just received mail you don’t care about. Worst part about this though is that the people around you probably heard the vibration go off and saw you take a look at your phone. So even if you chose not to have a look at it, everybody around you got notified about it. The Watch’s taptic engine is something you just don’t hear at all1. And if you do choose to look at it, you just raise your wrist and see what it’s all about. This is fantastic. It’s also great how the iPhone - when it’s trying to send you a notification - checks to see if it’s connected to a watch first and if you’re currently wearing it so that it can send the notification in the best way possible. I know a guy who owns a Moto 360 and whenever he gets a notification I can hear his phone vibrate and seconds later I hear his watch vibrate as well. That’s not how it should be.

The Apple Watch is all about health tracking. Not only does it track how often you stand up and walk about, but it uses it’s huge optical sensor on the back to check your heart rate every 20 minutes. I’ve used a Fitbit and Misfit tracker for a little while and am infected by the gamification virus2 so I’m happy to see that you can also gather different achievements based on how often you achieve the activity tracker goals. I’m also a huge fan of all kinds of statistics about myself. I absolutely love having stats and visualized graphs about as much of my life as I can and this whole quantified self movement plays right up that alley. So being able to view a graph of my heart rate in the Health Kit app and everything the Activity app does is something I enjoy a lot. The only thing I’d enjoy even more here would be a finer-grained heart rate measurement. Probably something not possible with the watch’s battery life at the moment, but only every 20 minutes is kinda rough.

I might not have been a big watch user the last few years. But every time I do wear one on my wrist, I very much enjoy the convenience of quickly being able to tell the time. It seems like such a minor thing, but it definitely is worth a lot. I also check my iPhone multiple times a day for the current temperature outside. Doing this with the same simplicity of checking the time is also very comfortable. Definitely a plus.

Remember how excited Jonny Ive seemed about the digital crown when the Apple Watch was announced? It seemed kinda ridiculous at the time, but now I have to say that this input device really is something. Scrolling through content with the digital crown just feels so much easier than swiping on this little screen. I’m very happy Apple chose this route and did not just give us a little iPhone screen on our wrists where we have to swipe on the screen obstructing the view almost entirely.

So much for the positive points, let’s get to why I’m actually writing this. The things I unfortunately don’t like about the watch.

The watch’s battery is something a lot of people have already criticized before it even came out. Seemed a bit unfair at the time and it turns out the criticism doesn’t really apply. The watch’s internal battery seems to be able to easily run for at least two days without a problem. The actual problem here is the battery of the iPhone it’s paired to. My iPhone used to be able to run for more than 48 hours with moderate usage. Using the same set of apps and adding minimal playing around on the watch I got 9 hours of battery life from my phone before it died on me. I played around with the iPhone settings, revoked background activity rights from a lot of apps which didn’t need this for their core functionality and even kicked quite a few apps from my phone that I didn’t really use. Add this to strictly only using the watch for notifications and even not using the phone besides answering a few messages and I got it to 14 hours. That’s still ridiculously low. I usually use my phone a lot more than that and can’t have it running out of juice every single evening. Sorry, but this is a huge deal breaker. My iPhone is also constantly warm, which just adds to the fact that the watch is stressing it even when I’m not using it.

To be fair the watch really isn’t meant as a replacement device for my phone. The whole idea is having something on your wrist that taps you on incoming notifications and gives you quick overviews for stuff that prompts you to pull your phone out of your pocket the most. I haven’t really gotten used to using glances on the watch3, but this is what that small device on your wrist is for. Doing much more than that like trying to productively answer messages and read e-mail is just absurd. Yet this is what I most struggle with. I receive a notification about an incoming message. I see that on the watch. I can then either (if it’s something like iMessage that even lets me interactively answer it on the watch) choose to answer it with a predefined message or talk to my watch (nope). If the predefined message doesn’t fit I’m back to pulling out my phone. Most messages throughout the day aren’t received through iMessage though, but through Threema, Signal, Facebook Chat or sadly even WhatsApp besides others. None of these even offer me the option of using an ill-fitting predefined message or dictation (again: nope). So all I get by wearing the watch is the neat notification that I can then either ignore or take out my phone to answer.

This one’s a doozy. It has been very awkward in the past to be at some kind of event or gathering and pulling out your phone to check what a vibration was about. You usually just don’t do it4. But while it’s much easier sneaking a peak at your watch, it turns out that it’s even less acceptable and sends far more of a negative message doing this. It sends a signal to other people that you’re bored and want to be somewhere else when you’re maybe just checking a tweet you were mentioned in. And this’ll stay a problem as long as smartwatches or fancy wearables aren’t yet ubiquitous. Maybe I am overthinking it, but even if the uncomfortable feeling is just in my head, it’s still there.

When Apple first announced Siri I never thought I’d use it. And even though I still hate using the dictation feature, Siri has come to be something I use often. What the weather is going to be like or to set timers and reminders are the functions I use most of the time and several times daily. It still astounds me how well this works on the iPhone. On the watch however it’s a different picture. I’m not sure what the cause for this is, but I can’t get the Hey Siri command to function 50% of the time and when it does it usually already jumps to How can I help you? once it displays itself ignoring my additional input. This has me losing trust in a feature I’ve reliably been using on my phone which means I sadly just won’t be using it on the watch.

There are a few other minor points as well, but they feel like nitpicking. Things like the size (I maybe should’ve gone for the 38mm version, but I didn’t) or a bug where iMessage notifications still let the iPhone vibrate first before the notification hits the watch a few seconds later. And others like being uncomfortable wearing the watch even in light rain, although I’ve now seen multiple videos of people taking theirs swimming without any complications. Worst of all is probably the fact that I can check my watch for the current time, get sidetracked by a displayed upcoming event, put my wrist back down and forgot the time, something that’s already happening all the time on the phone.

######To conclude, I really like what Apple has built here. The Apple Watch is a fantastic little device that’s mostly fun to use and combines nicely with an iPhone for most of the time, but it gets into the way when it doesn’t. Some of the issues I have with the watch can probably be fixed by software updates and optimizations, but I’m already on the verge of developing an even worse case of battery paranoia every day which pushes me towards just not using the watch or even leaving it at home, so this device probably just isn’t for me. Being an earlier adopter was fun for the iPhone and iPad, but not for the watch. I’m excited for what’s to come and will probably buy a future version of this device. Let’s also see what Apple has planned for the watch at WWDC. The epicenter of change has to be promising something great.